My name is Murray Somerville, I’m an illustrator based in London. I draw comics, self-publish zines and also do commercial illustration! I’m also one half of Dazeray, alongside illustrator Daisy Whitewolf, an illustration partnership that does large scale murals and commissions together. AND I’m also one half co-founder of Melon Shrub, with Jack Burston, which is a zine publisher and growing art collective. Other than that I play bass in alternative rock band, Avon Cottage.

I still do the majority of my work on paper with pens and other assortments of materials. My process can involve layering things on tracing paper, sketches and finalising with pen before then scanning and finishing on photoshop or illustrator, depending what kind of image I’m working on. I do, however do most of the colouring of my work on photoshop. I enjoy using adobe etc., but I’m most comfortable when doing things on paper, allows me to be more expressive with my mark making! 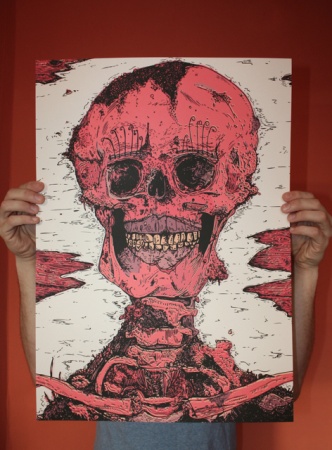 My ideal work environment is essentially, enough space to have lots of different bits and pieces of projects I’m working on around me, usually me being on my own and having music playing. Music is usually key to me being in a good groove when I work, depending on whatever I’m in the mood for that day, but it’s a MUST! Oh and having all materials within an arms length distance, so annoying having to get up and root around for stuff when you’re on a roll!

My inspiration comes from a whole host of sources, some I’m aware of, some subconscious from things I’ve seen that just pop into my head. Alot of my style of thinking has been influenced heavily by cartoons. I’ve literally never stopped watching cartoons and it can be anything like Ren & Stimpy / The Simpsons / Evangelion / X-men / Dexter’s Lab / Adventure Time etc. etc. I think having a childhood bingeing on cartoons really shaped the way I work and think about my illustration. Other than that, films/music, conversations, other artists and oh and definitely comics! Yea comics are awesome and they give alot of inspiration, partly due to the direct involvement with my work! Haha I could be here all day if I start listing all the things I love that inspire me, but I will just say that SAGA is turning out the be a fantastic comic series and also everyone should find a graphic novel called “Moonshadow”. It’s SO good!

There’s always someone who’s inspiring me or doing awesome work that you look at and you’re just like Wow! Daisy Whitewolf, my girlfriend but also illustrator partner in Dazeray is always inspiring me when we work on a project together! Then there’s people like Jamie Mills, Jack Teagle & Donya Todd, Jon Boam, Sophie Alda and countless others who are all doing their thing in the illustration scene and are just fantastic!