Hello, I'm John and I'm an illustrator and comics artist based in South London.

I make editorial illustrations for magazines and books  as well as book covers. In 2013, my graphic poem Capital City about the financial crisis picked up an Association of Illustrators award. On the comics front I co-create (with Dan Cox) the musical, psychedelic soap opera Hitsville UK and I draw a whenever-I-can-fit-it-in web comic called Culture.

What inspired you to become an artist?

Yikes, there's a question. I think very few creative folk decide to become an artist, you just feel the need to make pictures, stories, songs, whatever.

I don't remember feeling that urge for the first time but I'm sure my parents had something to do with it. They would deny this because they're both ridiculously modest, but they stimulated an interest in the arts in my brother and I from a young age. They dabbled with painting and my Dad is a music obsessive. My Mum got me into some of my favourite artists, including Francis Bacon, Lucian Freud and William Blake.

Stories and people keep me inspired to make art. People can be a pain in the arse but things only get interesting when you put them in the picture. I did an editorial illustration about the future of work where you only see the foot of the protagonist, but it's enough. As soon as there's a human element you start wondering who they are, what their story is, what's at stake.

What tools do you use to organize your work?

I could be better organised. It's certainly a challenge when you're working freelance. I juggle illustration, comics and working a casual job. The main tool I use is an old fashioned diary.

Deadlines are good to focus the mind on getting things done, and working out what order you need to do them in. I recently re-discovered a great quote from Douglas Adams,

I love deadlines. I love the whooshing noise they make as they go by

That's probably fine if you're a famous novelist but not a habit a freelance creative wants to get in.

My girlfriend also tells me when I should be doing things!

Decent light, drawing board, paper, pens, computer for photoshop and music, digital radio for BBC 6music and Radio 4. I'd like to work in a studio, perhaps with a couple of other people with similar taste in music but I can't afford it at the moment. Right now my work space is one end of our living room but we're moving to a new flat soon with a spare room that I can turn into my creative den, leaving my girlfriend to watch the telly in peace.

Where does your design inspiration come from?

Illustrations, paintings, album covers, comics, architecture that creates certain moods – I love the backs of London houses with grimy old brickwork. There are a whole generation of UK comics artists from 2000AD that are lodged in my subconscious. 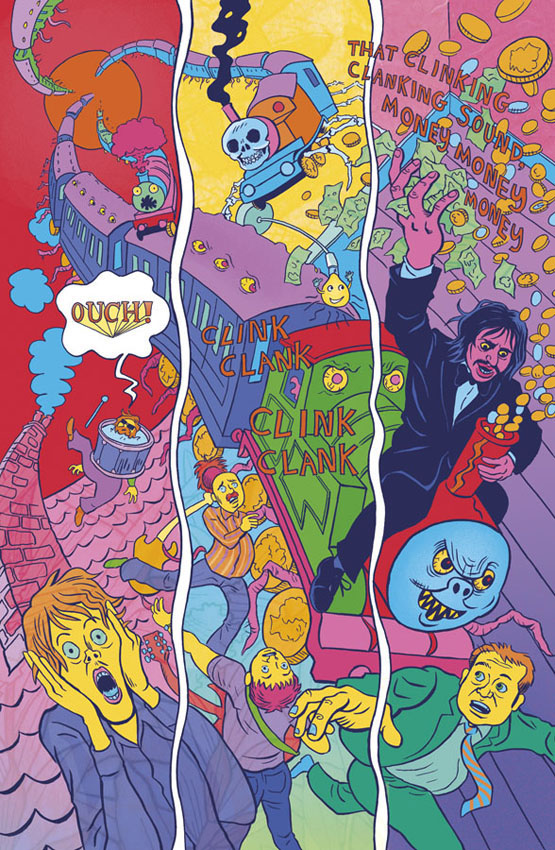 Who are the creative people you admire most?

All sorts, alive and dead, and musicians and writers as well as visual artists. My all time comics heroes are Grant Morrison, Peter Milligan, Brendan McCarthy, Jaime Hernandez. I feel very smug to be on talking terms with recent trailblazers such as Andy Poyiadgi and Christian Ward.

Bjork is a hero of mine, because she's doing exactly what a musical artist should be doing – following her own instinct and making things that are right on the ridiculous/profound border. Likewise Damon Albarn, who never seems to stop! I made a painting last year for a charity auction of Bjork, Kurt Vonnegut and William Blake at a dinner party together. I love Vonnegut because he's wise, witty and humane. All of his books could be narrated by the same guy, but that's why I go back to them, it's like chatting to the funniest and cleverest night owl in the bar. 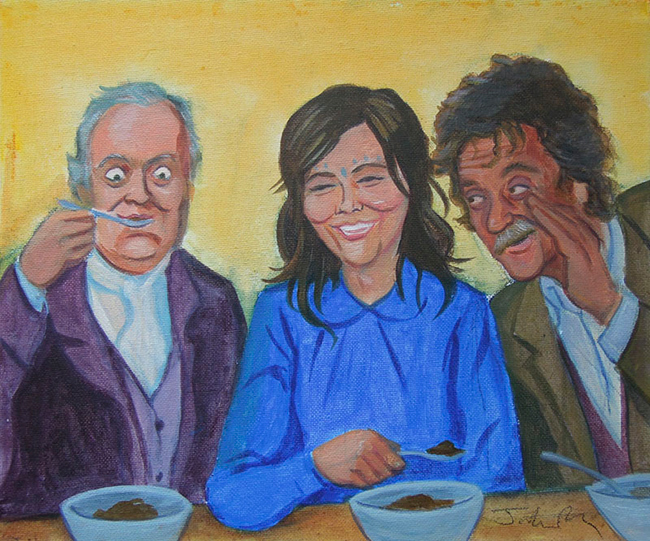 William blake is probably my biggest creative hero. Capital City was hugely influenced by his apocalyptic take on events in his own time like the American and French Revolutions and I drew a comic strip for two years for Time Out called 'William Blake, Taxi Driver. I'm working on something at the moment to do with Blake, and trying to get my head around his arcane personal mythology. What I admire most about Blake is that he pursued his own vision, and that his life answered the question that all freelance artists ask themselves in the dark hours of the night – would you carry on creating art if nobody cared? I'm not sure I could honestly answer yes!